I started this blog a few years ago while I was living and working in China. I wanted to try and keep track of my experiences living in a fascinating place and chronical the effect that had on my career. It’s kind of fun for me to look back on it now especially knowing I didn’t succeed in capturing 1/100th of it…

Starting in 2008 I began regularly traveling to and living for extended periods in China and Taiwan… This was also when I left Los Angeles and headed south to see what my home state of Louisiana had to offer. Fanny had accepted a job working with her brother in Beijing so it seemed like as good a time as any. While in China FANNY and I lived in Shenzhen “the Beijing job having moved there ” which is a huge super fast growing mega city right next to Hong Kong. we traveled all over Mainland C. , Hong Kong, Macau and of course Taiwan. I worked on commercial set designs, film projects and the occasional illustration. I even got a chance to spend a little over two years working with some incredible folks on what should have been the largest ” 245,000 sq meter ” indoor theme park in the world, “Leo’s Kingdom ” You can find some of my old post about that in the archive… my China adventure ended in 2015 ” at least for now”, when ” Leo’s ” was put on indefinite hold and Fanny’s brother began the process of closing down their offices in Shenzhen.

A lots changed since then and so I am going to pick this blog up again to better reflect my current life back in America and working full Time as member of Universal’s Creative Core.

Fanny and I have made a life here in Orlando with a nice house, one grumpy old cat and ” for now at least ” too many cars…

I am in a good position with the studio, working on exciting future attractions for the parks. My commercial set design work has fallen by the side over the last few years as I usually don’t have the time anymore and frankly with the ever increasing expectations and shrinking budgets of commercial productions I enjoy the security that comes with being a member of a team on incredibly talented artist…I will still do side gigs, but now I have the option of turning down work, something I could never afford to do in the past…

In a very real sense I have come full circle. My career began in the themed entertainment world some 22 years ago when I was hired right out of school to work on Blue Planet Bremerhaven for BRC Imagination Arts. My other opportunity was with Universal Creative back before they moved to Florida. I used to kick myself for having turned that job down ” it didn’t pay as much as BRC was offering and I was an idiot kid back then 😛 “. But maybe in the end it’s more about the journey then the destination… the really funny part is I am right now working alongside some of the very same people as I was back in 1997, including Mathew Martin my second ever art director 🙂

A lot has changed within the industry over time but the fundamentals are still to create great art and design reflecting the best attractions possible for people to enjoy.

I recently showed some work at Universals artist showcase, mine were digital prints but there was a wide range of work on display, traditional painting, virtual reality, physical models and even some musical performance.

This first piece is actually a digital reworking of an acrylic painting I did years ago possibly started at Art Center. The original was given to an old friend of my dads that has since passed away, I don’t know where or if it still exist so I worked on a scan I found of it… 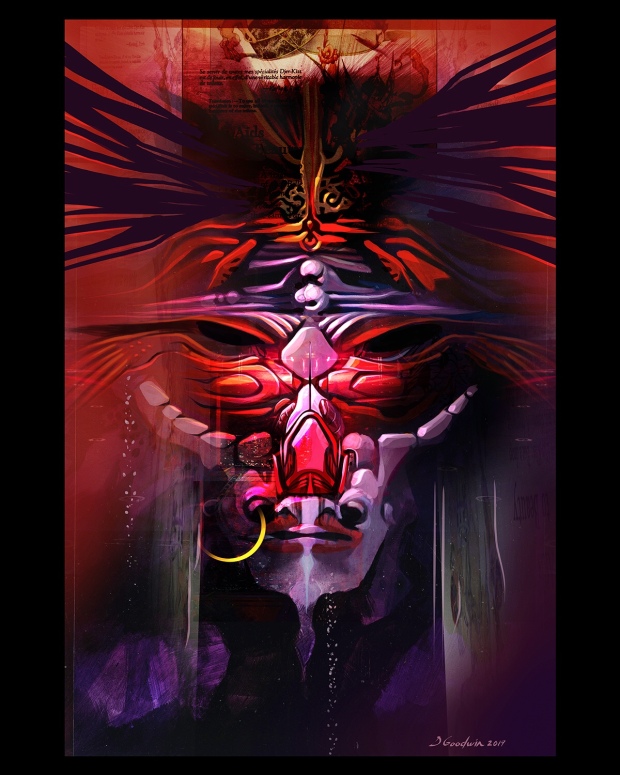 This started life as a series of sketches done on a trip to Louisiana in the early 2000’s. It’s all digital and is one of a series of three I called ” Shrunken Heads ”

this lil guy was actually started on my iPad Pro while sitting through a meeting. I doodle during meetings it actually helps me focus on what’s being discussed. My favorite comment of the evening was from my friend Mick who said while looking at this that ” I don’t know what it is but I know we’ve been there ” 😛

Well that’s it for now, if anyone sees this I hope you found it interesting, there will be more activity coming up soon as lots is happening at the old homestead…