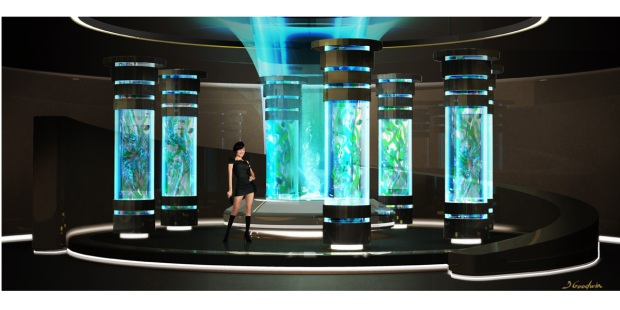 Its Dec and I am back in Shenzhen again. Fanny and I are moved into a new apartment still here in Liantang close to MegaU but I am thinking its a much better fit then the previous shoebox sized one. Its a bit cold and grey today so I figure its a good time to make my first post in awhile. We are on the 21st floor here so the noise from below is much less I haven’t experienced it yet but Fanny says we have a singing neighbor that should be interesting. 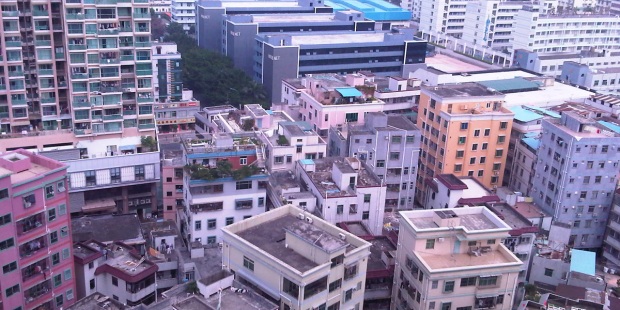 Fanny’s work is quite close, which is main reason we are living here on the farm as we call it as opposed to closer to the center of things. In the picture above you can see her building, those grey ones center image that say internet on the side. Literally a 5 min walk quite a bit different then what we had in Los Angeles… I may be moving into a space over there when we return from Taiwan should be fun and I may have some work with A new marketing effort Fanny’s nephew Andrew is starting…

Since we are close I can see my girl for lunch here she is enjoying my extreme garlic dumpling surprise. 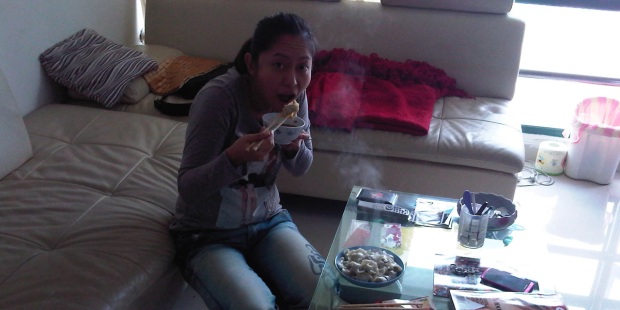 I have had a busy month in Nov preparing for coming to China, I worked on 4 commercials and then right before flying out to China I had an interview with the New York Film Union Local 829. I have resisted joining the unions up till now mostly because in the past I was not fully set on working in film and television.My other area of work Themed Entertainment has no unions. But recently the unions have become more involved in the commercial production industry most likely due to the economic downturn we have all been experiencing.

My good friend and one of my favorite production designers to work for Tom Lisowski wanted me for some work on the Film ” Summer at Dog Dave’s ” Even though it was a low budget film it still fell under union jurisdiction. He helped me get in touch with the good folks over at 829. Below I am going to show some of the portfolio of work I presented at the interview. Since I applied as a set designer I tried to make sure I showed a good variety of work not only finished results but some of the process as well.

I printed out images to show ” something I have not done in many years ” and below are the results of that. I presented 3 books 2 with new work specifically put together for the interview and one book of older loose examples. The Specific work includes design and illustrations for the feature film  ” Arena ” and a more  in depth look at designs for a Commercial to be aired in Taiwan

Here are some of the set designs and an illustrations for Arena, The film has been released so I can now show the work… Milla’s bedroom like most of the scenes were to be filmed in an old Coca Cola bottling plant right down the street from my house in Baton Rouge. The aesthetic was dark and menacing with high tech and luxury items hidden within a heavy industrial environment.

Logan ” Samuel Jackson’s character ” presides over his illegal empire from this office space. Tom  provided me with great little napkin sketches to work from which I was left pretty free to interpret. Later as the process moved along the reality of budget kicked in but then thats always the way… As usual with my work I am producing off site in my home studio corresponding with Tom over the phone and through email.

This was one of my favorite ones, the set where our hero fights the released serial killer. Since in the script this space would be a virtual spce I could detour a bit from the factory look of other areas but again it would be filmed in the bottling plant so we came up with this framework structured space.

The first set I worked on for Arena was to be the holding cells in which prisoners are held between fights. I have yet to see the film so I am really curious to see how they all turned out. Not shown in this set are the designs for my favorite set the ” Womb ” control center which due to time constraints I did not take to finished renderings. I gave Tom the design drawings and the 3D model and we were done, I still intend to render that one at some point just because I really liked it…

For the main portion of the presentation I used one of the last commercials I worked on which was for Clear dandruff shampoo of all things. The spot will be staring Taiwanese celebrity ” Little S ” or as I know her Mrs C from Fanny’s favorite Taiwanese variety show. This is the second commercial I have worked on for the asian market both working with a really great guy Production Designer Gary Matteson. Unlike the previous spot Gary will not be heading over there so we need to provide as much information and direction as possible to help things move smoothly.

The first part I show the union panel is 2 pages of what I am calling ideation. I show some of what I am provided by Gary and my initial sketches to get started. there will be 2 sets one we are calling the Corridor and one the Chamber.

Here I am showing the final designed set that we sent to Taiwan for construction, obviously there is no way to show all the stages and variations it takes to get here, suffice to say its a lot…

These are examples of the multitude of dimensioned views we produce, in the case of this set we pretty much had to call out every single dimension due to the fact that Gary would not be on hand to oversee.That being said it is always amazing to me how well the set builders interpret the design, many times I feel like what they come up with on set is even better then what was given to them…

Here I am showing the final illustration for the Chamber with two distinct lighting and color options. I did this for the sake of the interview Gary is one of those designers with a very clear vision of what he wants to see in terms of lighting and it was always going to be the dark version… 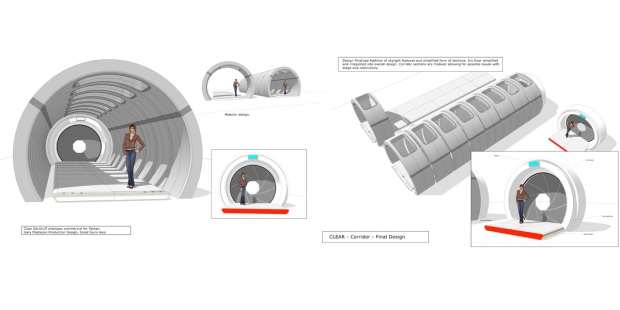 The last part of my presentation was made up of individual prints from various Television Commercials and Themed Entertainment projects. I find that when you are presenting work to creative professionals quite often the best thing to do is simply provide them access to the work and then stand by to answer questions. This is probably counter to what most people must do in an interview but it seems to work for artist.

This is an example of what I showed in the loose book, designs for last years Super Bowl commercial ” Welcome ” for Mercedes Benz. this was done for my good friends Production designer Stephen Sumney and Art Director Gus Black.

I am happy to say that the 4 gentleman who surveyed my work reacted to it quite well and yesterday I received notification that I passed muster. My admission still will need to be voted on at the next union meeting but I have every reason to believe I will be brought in. This marks a real turning point for me in my career as for the last 14 some odd years I have been operating completely on my own as a freelance consultant. It will be a nice thing to officially be part of something and I am really looking forward to what will happen as a result.

All in all the experience of the interview was a positive one, baring the snafu of American Airlines losing my luggage on my first trip to the Big Apple. I think I really like New York city. It is huge and complex with much to see and I hope to go back soon when I have more time to take it in…